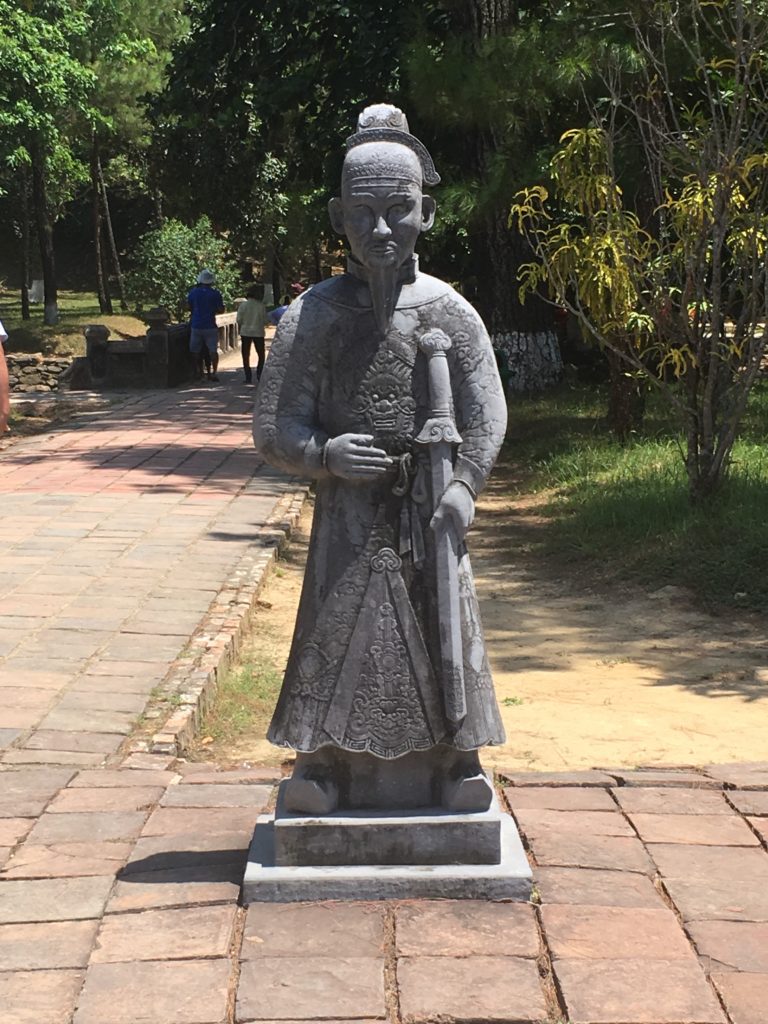 Broken record time: Another amazing day that I can’t even begin to describe how lucky I am to have experienced. Bill picked me up promptly this morning for a motorbike tour of Hue and the surrounding countryside to include the Thanh Toan Bridge, three tombs of Nguyen Dynasty emperors, and the Imperial City.

First off, Bill is amazing! He and Nathan are tied for best guides ever. All of my other guides have been in their early 20s, but Bill was born in 1945, in the Hue countryside, and worked with the U.S. Marines during the American War (and has the colorful language to attest to this, lol). His life story is pretty intense. When the other guides have told the history of Vietnam, it was 1,000-year-old history or very recent history. Bill put a lot of things in context of the American War, and I knew he was speaking from experience. “You see that field? The Viet Cong built a tunnel complex under there like Cu Chi.” “You see that river? The NVA sent a regiment up it and ambushed the Americans.” “See that mountain? The Americans had 55 bases around the mountain complex and valley. That one is the LZ.” These were but a few examples of many I heard throughout the day.

The first stop was a Japanese-style bridge built in 1776 (“American independence!” as Bill said excitedly.) to honor a childless woman that an emperor decreed needed to have a bridge built for her so that she would continued to be worshipped after death. In Vietnam, ancestors are honored, and each family has an altar honoring parents, grandparents, and so forth. Since she was childless, she wouldn’t have that, so the emperor declared she would be honored by everyone. Bill lit two incense sticks and gave one to me. I know it was supposed to be for the woman, but of course I was thinking of my sister. I’ve lit a candle for her in several churches/cathedrals in several states and three European countries and now I’ve burned incense for her in Asia.

A market was nearby, so we wandered that and Bill described the different herbs, fruits, and vegetables for sale that we don’t have in the U.S.

Next, it was time to see three of the five tombs of the emperors of the Nguyen Dynasty, which ruled from 1802 to 1945 (even under French colonization) and whose capital was Hue.

Each one had similar features (temples in Vietnam, I’ve learned have a lot of features in common) as far as the buildings and statues (four Chinese soldiers, a horse, and an elephant facing four more soldiers, a horse, and an elephant across the courtyard) are concerned, but the settings were very different. The first (Khai Dinh) was very compact but impressive, the second (Minh Mang) was pastoral, and the third (Tu Duc, the grandest of all tombs) was extensive, with a mix of buildings and pastoral settings. They were all neat to explore.

In between two of the tombs, Bill took me to a cemetery. Now, cemeteries in Vietnam are elaborate, with individual temples and pagodas instead of headstones for Buddhists and elaborate crosses and tombs for Christians (even though people are buried underground, the tombs look like they’re buried above ground). I’ve seen dozens of tiny cemeteries along the countryside here that serve villages. Well, this one was massive and went on for miles and miles over sloping hills with insanely ornate temples and crosses, many very colorful. Mom, you’d flip.

After the last tomb, I had a yummy lunch in Hue (a famous crispy rice flour crepe filled with pork and shrimp. Soooooooo good!) and then it was on to the Imperial City. Again, lots of tombs and cool buildings (like the emperor’s reading pavilion aka library), but with many similarities to things I’ve seen (day 3 in Hanoi being the only day I didn’t see at least one temple). I took over 400 pics today, with at least 100 being from the citadel, so I think it’ll be easier to throw some of those up on Facebook instead of trying to make a collage.

And so much for the 80% chance of thunderstorms today between 10 and 5. There was hardly a cloud in the sky all day! The heat index got up to nearly 130 today. It was a tad hot. 😉 Although it did start raining hard about 15 minutes after I got back to my hotel (even though it was perfectly sunny when Bill dropped me off) and then rained for about an hour. There were strong winds, and the hotel lost power for about an hour. During that severe storm in Hanoi, I was so convinced that we were going to lose power I wore my headlamp all evening. Today, when I wasn’t expecting it, wham! No power!

Ventured out by myself this evening and had a super yummy grilled pork and noodle dinner with peanuts from a street stall just down a bit from my hotel. It was the first time I ventured to one by myself, so I was proud of myself for pushing myself outside of my comfort zone. Yes, considering I’m traveling Vietnam by myself, that sounds funny, but I’ve been scared of sitting down at a street stall without a Vietnamese guide with me, which is stupid for a lot of reasons. Not the least of which is that street stalls sell one thing. There’s no menu, no language issues. You just sit down on the ubiquitous blue plastic stool and they bring you the dish. But that was scary to me for some reason. But now that I’ve done it, I can do it again! 🙂 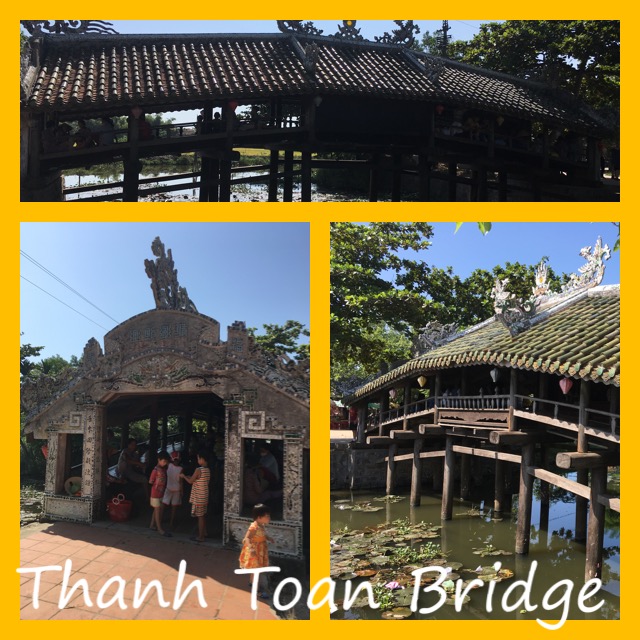 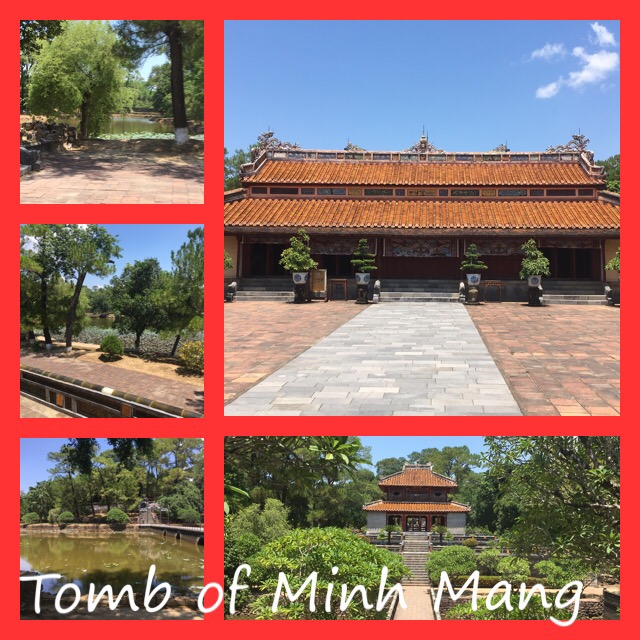 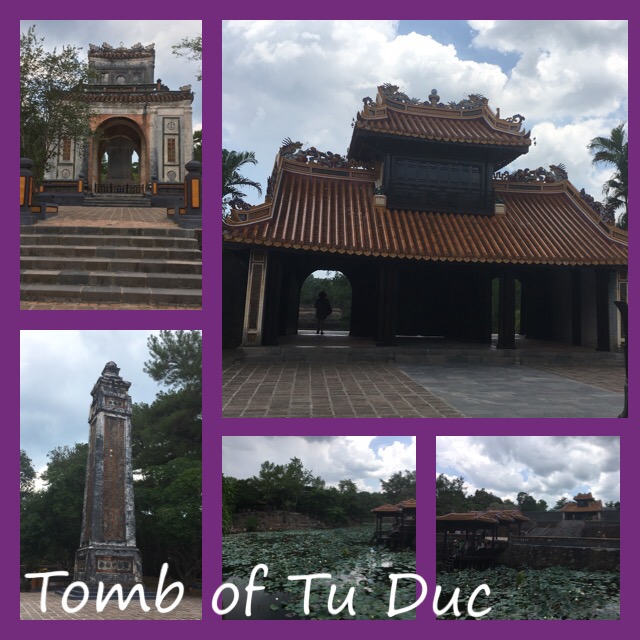 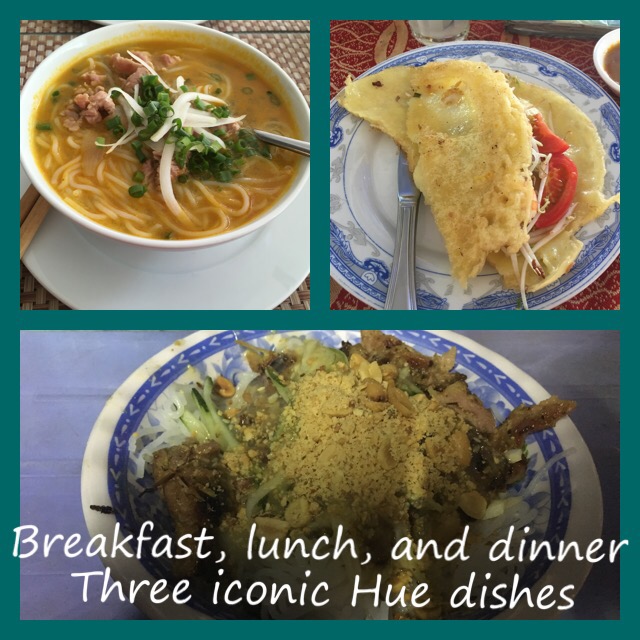