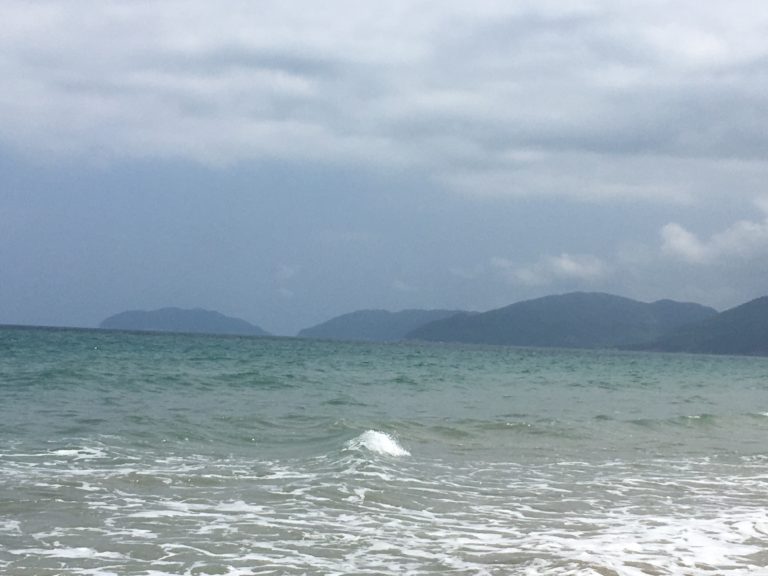 Yesterday, Bill asked me what I was doing today. I told him going to Hoi An. He asked whether it was via motorbike. I said it was. He said I should cancel and let him take me. I told him I had paid upfront (as I did for about half my tours) and it was nonrefundable. This was early in the day. By the end of the day, I was seriously considering taking a hit on the booked trip because I wanted Bill to take me. I decided to be fiscally responsible, however. Being a grown-up is hard, lol!

When I checked in at the Hue Backpackers Hostel for my tour and she pulled out the book, I saw a notation that “Mr. Bill” would be my driver. I got to hoping it would be my Bill (to the point that the SNL joke I grew up with didn’t even hit me until later), but figured “What are the chances?” Especially since I booked the two tours with completely different companies.

Well, guess who showed up? My comrade, Bill! It was awesome! After he strapped my backpack to the back of his bike, we were off, with a brief stop (didn’t even get off the bike) for him to introduce me to his girlfriend. No names exchanged, just “This is my girlfriend; this is my comrade.” On the way out of Hue, he mentioned we were driving through his village, but it wasn’t like the villages in the countryside. This was pure suburbia. I also heard a ton more anecdotes about the American War as Bill pointed out different places of significance throughout the day.

Once we were on the outskirts of Hue, I could see tons of development. The equivalent of condos going up in what were clearly very recently fields. Vietnam is one of the fastest economically growing countries, and I’m glad they’re experiencing growth, but I also know a lot of traditional ways and beautiful land will be lost to development, and that makes me sad. I really have fallen in love with this country and the Vietnamese people.

Today’s sites were breathtakingly beautiful! The ocean on one side, the mountains on the other. I just stared in awe throughout most of the ride. We stopped at a little fishing village and then at Elephant Springs, which is a natural swimming hole that attracts a lot of tourists and Vietnamese families. Next stop was the gorgeous Lang Co Beach, and I swam in the East (South China) Sea for the first time! Next it was up Hai Van Pass, which offers stunning views at the top. I was super nervous because climbing up mountains makes me…tense, to say the least (ask Matt about my Ojai freak-out sometime, lol). But it’s one of two things you have to do in Vietnam (the other being Halong Bay, which I am still trying to get over) and I knew I really, really wanted to do it, I just had to conquer my fear (and not irrational street stall fear, but actual panic). I was fine! Turns out the pass is not as high as  I thought it was, so I never got the panicky feeling I’ve gotten on other mountains once I’m at a certain elevation.

And I don’t think I’ve ever seen more stunning views in my life, truly.

After that it was down to Danang for a stop at My Khe Beach, also known as China Beach where Americans took their R&R during the war, and then on to Hoi An. It was a gorgeous sunny day most of the day (although rain clouds gathered over mountains to the west even as the sun was beating down on me on the coast), ut 10 minutes from my hotel, the sky decided to open up in a total downpour. Fortunately, I invested in waterproof stuff, so I got a little (okay, a lot) wet, but my stuff stayed dry!

I was sad to say good-bye to Bill, especially since it was rushed in the middle of a monsoon, but happy to escape inside. This hotel is more like a B&B, and it’s very charming! I can’t wait to see it in the daylight tomorrow when it’s not pouring down rain! By the time the rain stopped, it was dark out. I’m quite far from the city center, so I decided to stay put.

The pics of the day are too gorgeous to smash only a few into a collage, so onto Facebook they go!

« Day 5: Hue and Countryside
Day 7: Disaster Strikes in the Rice Paddy: The Sequel »