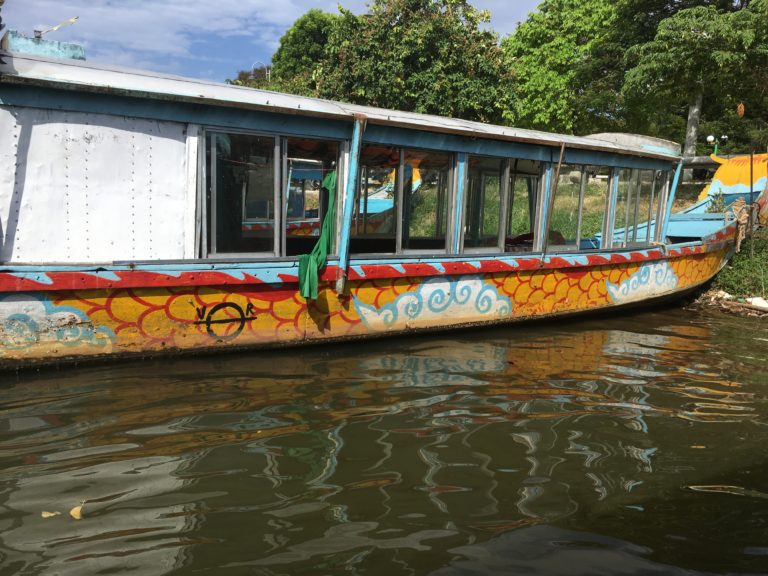 The overnight train was not as bad as I feared (but still somewhat stressful), and I slept more than I thought I would. The only other time I took an overnight train, from Munich to Paris, I didn’t even sleep for one minute, and this despite the fact that I had had an overnight flight the night before and didn’t sleep one minute on that, so it’d been something like 48 hours since I had slept when I took that train ride. So, I was pleasantly surprised that I was able to sleep this time for about 1-2 hours at a time a few times.

I saw the sun for the first time in days when I arrived at 9 am in Hue, so I was pretty stoked about that. Then onto my hotel. I had two people open the door for me, another whisked my backpack away instantly and it was waiting in my room for me, they had me sit down with fruit and fresh watermelon juice while they checked me in, and then they told me that even though I was early, my upgraded executive room overlooking the river was ready and I should go rest because I looked tired. Best. Check-in experience. Ever. Then a wonderful woman (Emily) asked if I’d like a map of Hue and some advice. I did, so she sat with me and gave me all the inside scoop on the best place (and the most to pay) to get the famous local foods Hue is famous for (like Bun Bo Hue, a soup, and Banh Beo, rice cakes), how to bargain at the market, and the best sites to see and how to get a discount. Score!

They were having a spa special, a 2.5-hour combo package with a body scrub, massage, and facial for $40. Now, I only treat myself to body scrubs/wraps in the States when I am traveling and the trip or local spas are special, so I’ve only had a handful. And they are generally ~$120 for 50 minutes. 2.5-hours of pampering for $40 after that train ride? Sign me up!

After my glorious time in the spa, it was time to look into a dragon boat ride down the Perfume River and visit the famous Dong Ba market.

I was planning on wandering down to the boat launch and hiring one, so I asked Emily the best way to go about it. She said she could call for a boatman, who would pick me up on motorbike at the hotel and the take me to the Thien Mu Pagoda and then drop me off at Dong Ba market (both of which are on the other side of the river). Perfect!

Within 5 minutes, the boatman arrived, and we were off. As we approached the boat launch there was a woman yelling in Vietnamese. Well, it turned out she was yelling at the man who picked me up, and she was the one who would be taking me on the boat. She yelled angrily the entire time she led me to the boat, untied the boat, helped me on, got a plastic chair for me, and pointed for me to sit in it. I really wish I knew Vietnamese!

The woman was in charge, but a younger man (about my age) drove the boat, and a little girl laid near the back. I realized the family lives on the boat as I saw a meager cooking area near the back, and the child’s toys scattered about. The woman also somehow bathed and changed clothes during the ride, as she came out later with wet hair and different clothes.

The ride down the river was pleasant with pretty views. It took about a half-hour to get to Thien Mu Pagoda, where I was dropped off and told “30 minutes you come back.”

The pagoda is seven-stories and the tallest religious structure in Vietnam. The temple is often included in folk songs about Hue. Built in the early 1600s, it’s still active from what I can tell because three young (maybe 6- or 7-year-old) boys wearing monk clothes and with very distinct, matching haircuts (shaved almost all over but with a patch of very long bangs) were doing some work on the grounds. Also, the car that the first Buddhist monk who lit himself on fire in protest in Saigon in the 1960s drove is there on display. He drove the car to an intersection in Saigon, stopped, got out of the car, sat in the middle of the intersection in the lotus position, calmly dumped gasoline all over himself, and lit himself on fire in protest of the religious oppression in Vietnam at the time. I’d read about him when I was 15 and have always been fascinated by his courage and conviction. It was humbling to see the car before me.

Next, was the return ride down the river to Dong Ba Market, which was chaotic, stressful, and an experience I don’t need to talk about or repeat. (The market experience, not the boat ride.)

I was back in my room by 6 pm, and even though all I’d had all day was a protein bar and the fruit, I wasn’t very hungry and just didn’t have the energy to go out and sit in one of the street stalls. I had another protein bar and fruit they left in the room, and I was good. I haven’t been sleeping since I got to Vietnam, and I don’t think it’s jet lag, because it’s not how I normally experience jet lag. I haven’t slept more than 2 hours at a time, and no more than 5-6 hours a night since I got here, with a good hour or two between the periods of sleep. It caught up with me last night! I was  asleep by 7 pm! I woke up briefly around 1 and then not again until 5 am, when I got up, deciding 10 hours was enough! I watched the sunrise over the Perfume River.

It’s sunny out now at 6 am (and was already 98 degrees at 5:30 am when I checked) and I have a motorbike tour of all of the iconic Hue sites booked from 9 am to 5 pm. It’s supposed to be great up until 10 and then after 5, and it’s supposed to storm between 10 and 5, pretty much the entire time of my tour! So much for the hot and dry season! Oh well, it’s not like my rain poncho hasn’t gotten a workout already!

I hope these little collages look okay. I’ve been doing them on an app and I’ve never seen what they look like on a screen bigger than my iPhone screen (which is the small screen, not the “big” iPhone 6 screen). 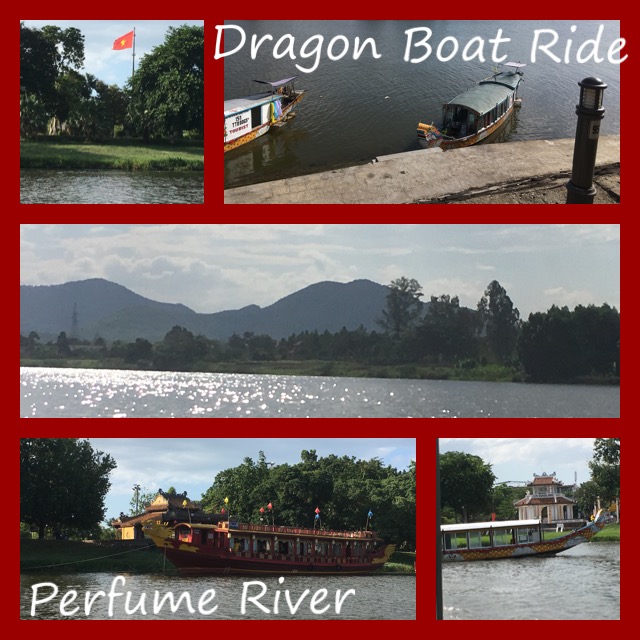 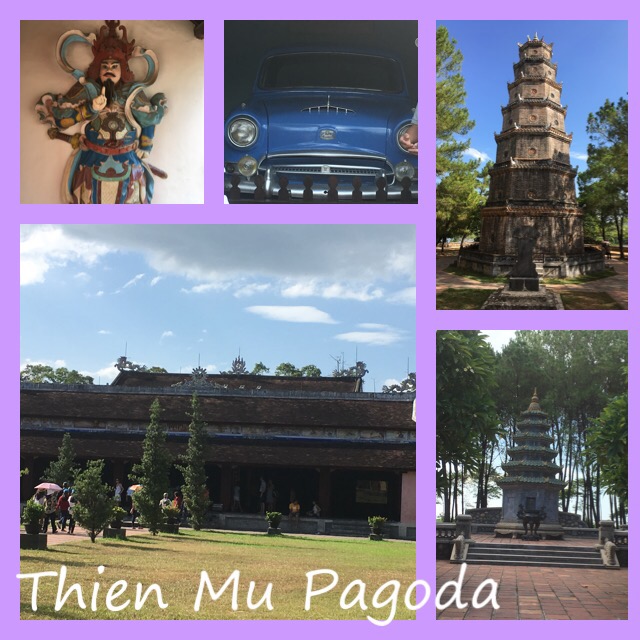 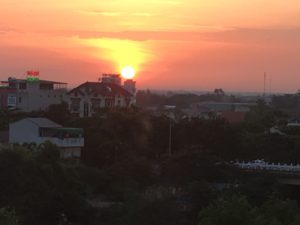 « Day 3: Hanoi and the Tropical Storm That Won’t End
Day 5: Hue and Countryside »