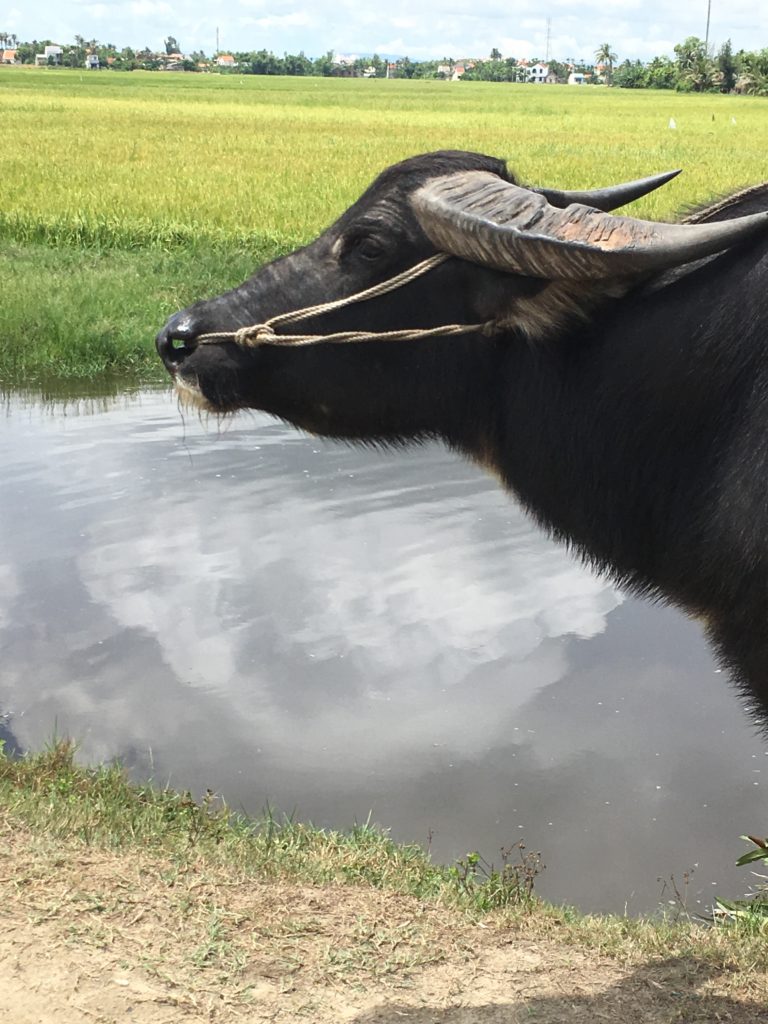 Day 8: Disaster Strikes in the Rice Paddy: The Trilogy

Okay, this “disaster” was hilarious!

After a delicious French (lemon crepes) and Vietnamese (spring rolls and tropical fruit) breakfast courtesy of my hotel, my latest tour guide, Turtle, showed up to take me on a bicycle ride around the Hoi An area that would focus on traditional Vietnamese life, with visits to farms and a fishing village.

Turtle is a character! He has such a big personally! I came to absolutely adore him within about a half an hour. He’s the son of rice farmers and gave me a really in-depth, first-hand explanation of rice farming. Other guides have touched on it, but Turtle really described the process, conditions, and feelings of rice farmers.

Another idyllic bike ride; the scenery is just so beautiful! I know, I know, broken record! 🙂 But it is!

We bicycled through tons of rice paddies with no bicycle mishaps the entire day! Go me! We also went through several cute villages, one of which Luong had taken me the day before. Our first stop was a fishing village. In this area, fishing is done at night. All the fisherman go out at sunset and return at sunrise, so the village was quiet, and the boats were all tied up along the river mouth (we were in a river but only a couple of kilometers from the East [South China] Sea, where the fishing is done). Turtle and I took a traditional basket boat ride from a fisherman. We did a little fishing and went in and out of water coconut canalways, which I’ve grown to love. Water coconut trees grow abundantly in the area and the coconuts look like flower blossoms. They’re beautiful! The palms are dried and used to make roofs. The fisherman made me a bracelet from one of the palms (which I forgot in my bicycle basket, so sad!). It was a relaxing time on the river!

We rode some more, through vegetable and herb farms (where you could smell the fresh herbs in the air) and stopped at a local market where I had a fresh fruit smoothie (included in the tour). Eventually, it was time for the thing I was looking forward to most and the whole reason I booked the tour: the water buffalo ride!

Now, since the joke before I left was to be aware of rice paddies, and I’d already had some bad luck in rice paddies, probably not smart for me to climb on the back of a very large animal in a rice paddy, right? Too bad; I was doing it no matter what!

So, the farmer (probably no more than 20 years old) ambled over from the rice paddy he was working in on the water buffalo to Turtle and I when he saw us. He and Turtle helped me on the water buffalo, and we were off! We just walked around a little bit in the ravine full of water, which was fine, because it’s not like being on a horse. The body is so wide that I never felt like I was seated on it very well, so every time he took a step, I felt like I was going to fall off. It was still cool though.

After that, it was off to the home of a woman who makes traditional cao lau noodles, which Hoi An is famous for. These noodles are only made in Hoi An, and then shipped to Hanoi and Saigon, and are only authentic if made from the water from the oldest well in Hoi An. The woman did not speak English, but Turtle described the process as he pointed out the various implements used to make the noodles, which is about an 8-step process. There were noodles in each of the various stages, so I got to see them all from making the rice flour to the finished product. Very cool! And so strange just to be wandering around someone’s house poking around the tools that constitute their livelihood!

Then it was back to Hoi An to a famous restaurant (Turtle introduced me to the owner) that Anthony Bourdain visited and declared had the world’s best banh mi. Turtle was so happy I hadn’t been there yet, and he was the one to take me. The banh mi was pretty darn good!

Then it was a short ride back to my hotel and I sadly said good-bye to Turtle. After a quick shower to get the ravine water off and finishing packing, I said good-bye to the lovely hotel receptionist who had been so sweet to me throughout my stay (even offering me late check-out after my tour without me even asking) and got my private car to Danang.

Danang is a big city, honestly without much charm that I can see, unlike Hanoi, which I’m in love with, and I’m pretty much only here to hang out at My Khe (China) Beach. The weather was not good when I arrived, so I hung out in the hotel, did laundry, caught up on my journal, and was asleep by 8 pm. Now it’s 6 am here and the weather’s gorgeous so I’m going to grab breakfast and hit the beach! I have a 1 pm train to Nha Trang (9.5-hour train ride), so must get that beach time in!

PS The next four days are beach days (with some sightseeing) and then two days in cosmopolitan Saigon, so there should be no more rice paddy incidents, lol